RULES OF CONDUCT FOR USE BY SPECTATORS 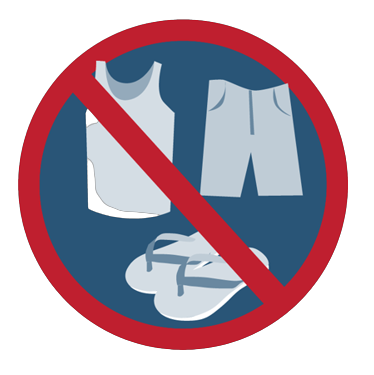 1) Those entering the theatre must dress appropriately and comply with the Dress Code. Shorts, tank tops, flip-flops, beachwear are not permitted.

The Puccini Festival Foundation reserves the right to refuse entry to any person wearing clothing unsuitable for the decorum of the Theatre and tickets will not be refundable.

The Dress Code requirements are clearly visible at the entrance of the Theatre, on the Puccini Festival Foundation website puccinifestival.it, on paper tickets, electronic tickets and on the Ticketone website.

– of drones and remote-controlled aeroplanes;

– of animals, even small animals.

4) It is forbidden to introduce into the theatre area:

– any bottle, container or other glass objects and any other blunt objects that may cause harm to oneself or others (e.g. motorbike helmets). In the stalls, the public is permitted to bring in half litre plastic bottles without caps, or after serving in paper cups;

– food of any kind. Drinks are only permitted
during intervals and only in the bar areas;

For security reasons, hall/assistance staff and security guardsare authorised to requisition all kinds of objects that are not permitted.

5) It is also forbidden:

– smoking in the stalls including the use of electronic cigarettes;

– to damage or tamper with facilities, infrastructure and services in any way;

– climbing on railings, parapets, partitions and other structures not intended for the public;

– it is forbidden to stand in the vicinity of passageways, access and exit routes, exits and entrances, stairways and any other escape route;

– photographing the show with or without a flash and taking any kind of audio/video footage without authorisation, including with a mobile phones;

– use of selfie sticks;

– using electronic devices such as ‘GoPro’, tablets or other devices capable of recording and transmitting, digitally or on any other medium, audio, video and audio-video material, collecting information or data relating to the performance;

– use of laser pointers;

– displaying signs, banners, flags, documents, drawings, printed material and banners containing propaganda of political, ideological or religious doctrines, statements or concepts inciting racial, ethnic or religious hatred, which may obstruct the smooth running of the show or the visibility of other spectators;

– abandoning objects or materials left unattended and which may obstruct escape routes or cause alarms;

6) Mobile phones must be switched off before the start of the performance.

7) In the event of an emergency, the public is requested to remain calm, line up towards the emergency exits and follow the instructions of the service personnel and acoustic messages.

For service communications directed to the whole audience present in the Theatre or in case of bad weather and/or for the management of possible emergencies, Fondazione Festival Pucciniano provides through an audio broadcasting system to spread multilingual acoustic messages (Italian, English).